Letter of Support from the Anti-Recidivism Coalition 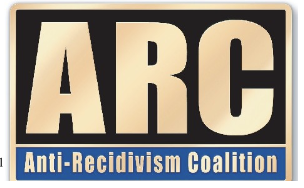 On behalf of the Anti-Recidivism Coalition (ARC) I write in support of the FIRST STEP Act,
which would improve the condition and opportunities for incarcerated individuals, reduce the risk
of recidivism upon release from prison, and promote public safety.
ARC supports HR 3356 because it will help support the thousands of Americans returning from
prison each year in becoming productive members of society. ARC members have been very
successful in their reentry, in part, because they began preparing for their success well before being
released from prison.

In 2015, 3 out of 10 federal prisoners and 6 out of 10 state prisoners released to a term of
community supervision returned to prison within 5 years. Far too many struggle with
unemployment, housing instability, and substance addiction when they come home. Many have
difficulty overcoming the trauma they experienced during their incarceration and reestablishing ties
to family and community that were damaged by their incarceration. We strongly believe that the
provisions of HR 3356 will lead to better outcomes for individuals reintegrating back into their
communities. Establishing a system that provides guidance and intensity of evidenced-based
recidivism reduction programming will provide the necessary resources for individuals to prepare
for release.

Whether through attaining GEDs and other higher degrees, getting certifications in various forms of
counseling or learning to computer code, ARC members have benefitted tremendously from
programs offered inside of California’s prisons. Expanding programming inside Federal prisons
will allow many individuals to seek therapy, education, and self-help programs that will help them
both while inside and ease their transition back to society. ARC supports education-based
incarceration and work programs. These can help incarcerated Americans make smooth transitions
back to society. Earning credits and allowing more prisoners to access programming creates a
better path for successful integration by providing incarcerated men and women with critical skills
and the confidence they need to succeed.

1320 E. 7 th St. • Suite 260 • Los Angeles, CA 90013 • T: 213.955 .5885 • F: 213.955.5903
HR 3356 will immediately make over four thousand people in federal prison eligible for early
release - by fixing a good time credit calculation, retroactively. Men and women in federal prison
will earn nearly 8 weeks (54 days) per year off of their sentence for good time. Thousands more will
soon become eligible to move from Bureau of Prisons facilities into home detention as a result of the
expansion of the elderly prisoner pilot program - which gives people 60 years or older who have
served more than 2/3 of their sentence an opportunity to serve the remainder of their sentence on
home confinement.

The bill will also expand the capacity of prison programming to ensure that individuals inside can
benefit from counseling, drug treatment, training and education. By participating in programming,
individuals will earn credits (at a rate of 10 days for every 30 of participating in programming) that
allow them to shorten the amount of time they spend in prison and release back to their communities
and families sooner - via expanded use of home confinement. It provides a pathway to pre-release
for even those deemed “high” or “medium” risk.

Currently, there is a significant lack of programming inside the federal prisons. HR 3356 authorizes
$50,000,000 each year for FY 2019 through 2023 (quarter of a billion), which can be used for
programming. This bill also allows more outside nonprofits, volunteers and faith-based groups to
enter federal prisons to provide programming. These volunteers will not only provide critical
programming, but also will serve as mentors to those inside and be a valuable asset in changing the
culture within the institutions and bringing hope and compassion to those inside.
The bill also expands work programs so that those inside have an opportunity to work and save
money in escrow accounts that they can use as they return home to get back on their feet. HR 3356
also creates an ID program so that men and women returning to society have identification necessary
to gain benefits, housing, and employment.

Currently, men and women can be housed thousands of miles away from their loved ones, left with
little opportunity to maintain familial relationships that are critical to both their well-being while
inside and successful reentry. HR 3356 will require that people living in federal prisons be housed
within 500 driving miles of their families. Allowing individuals to serve their sentences in facilities
closer to their family support system, maintains a healthy bond and strong ties to the community.
In the last two decades, the women’s prison population has risen by 700%. Our prisons and policies
were not designed to meet women’s needs and the result has been a system that traumatizes and
endangers women. The FIRST STEP Act will end the shackling of women in labor and post-partum.
Shackling pregnant women is dangerous and inhumane. The shackling of pregnant women
endangers the lives of the mother and fetus. HR 3356 sends a clear message of responsibility for the
health and safety of both the mother and the fetus during pregnancy by banning the use of shackles.
It will also provide hygiene items to women in prison at no charge and expand phone and visitation
time that are vital to the rehabilitation process and to allowing the 80%of women who are mothers in
prison stay connected to their children. The bill also contains a fix to Prison Rape Elimination Act,
which will improve how the audits of prison rape incidents are conducted. 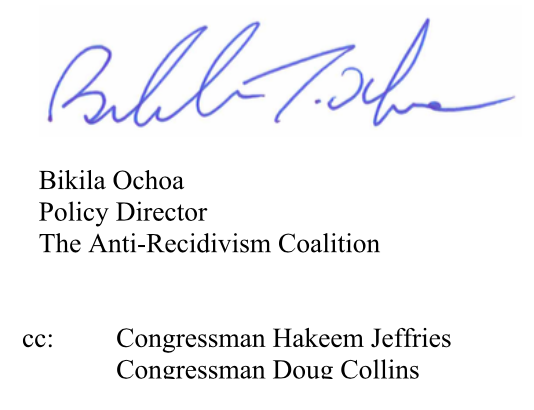