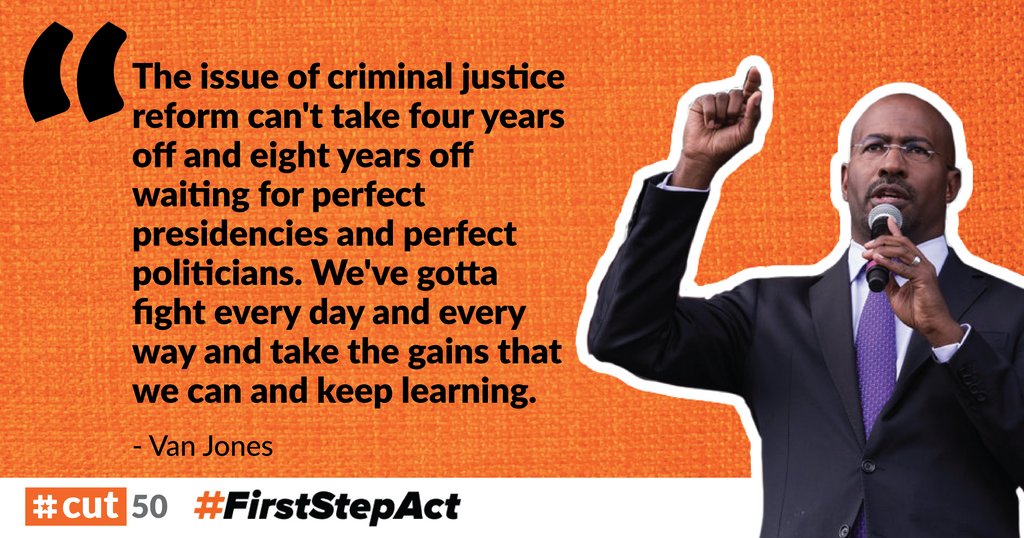 About The FIRST STEP Act

This is a MAJOR breakthrough in the long-fought battle for criminal justice reform. We are closer than we have been in a decade to passing robust criminal justice legislation in Congress, and one step closer to justice and relief for nearly 200,000 people in federal prisons and their families. 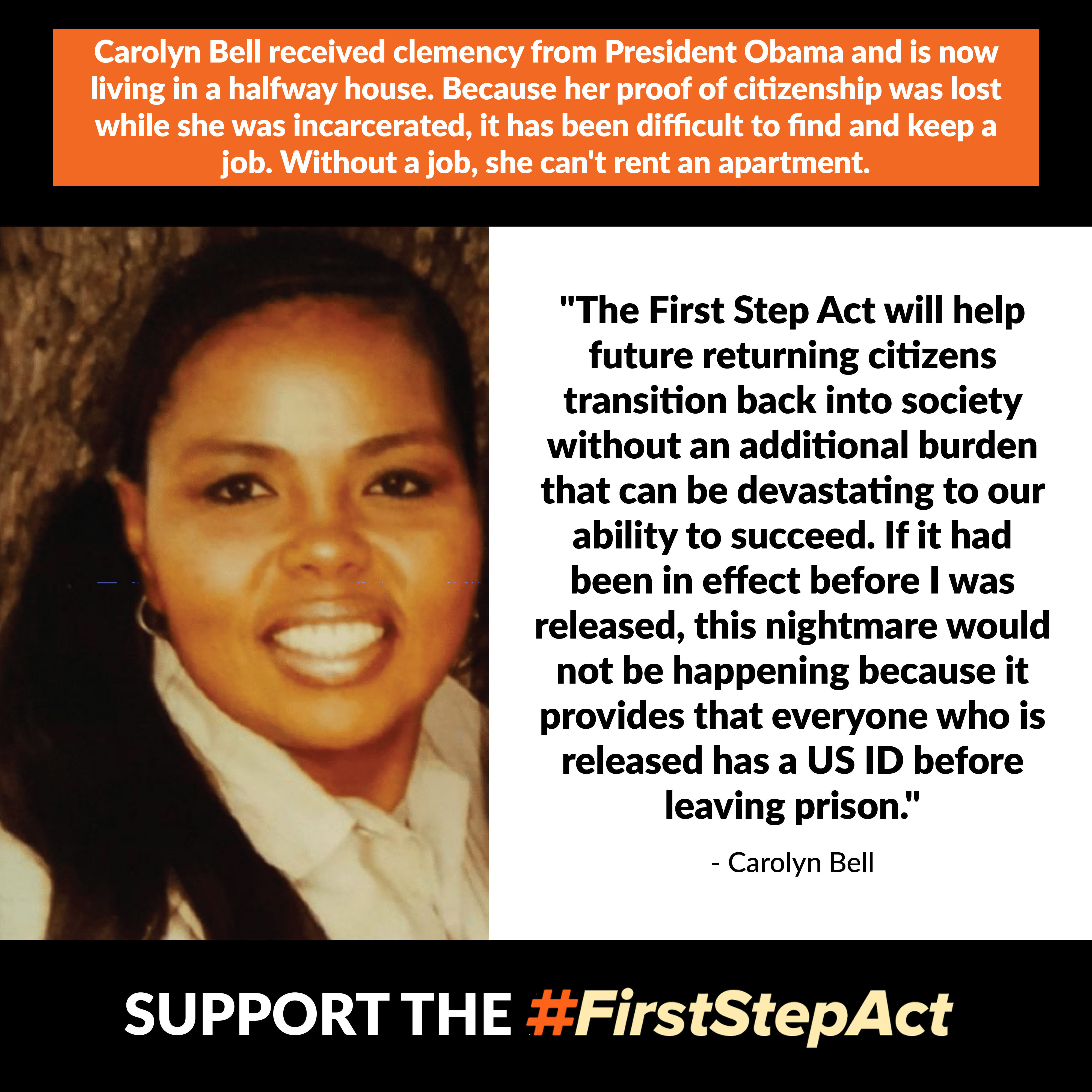 We would not be here today without the support of formerly incarcerated people, those who have had loved ones in prisons, and survivors of crime. This bill was shaped by their expertise and their experiences.

Individuals impacted by the criminal justice system have made multiple visits to the White House, dozens of lobbying trips to Capitol Hill, and hosted rallies in districts across the country. These efforts helped build empathy, understanding and support for the transformative changes to the Federal Bureau of Prisons proposed in the First Step Act. We are grateful to our group of more than 175 organizations and leaders who have joined us to support this bill and help get it across the finish line.

We are disappointed in some of the concessions made to appease the minority of GOP members who had concerns about this bill. We firmly believe that nobody should be excluded from earning Earned Time Credits, which are incentive to participate in programming, vocational training and education - all of which will help reduce crime. This is a compromise bill - and it is just the first step toward fixing the many broken pieces of our federal justice system. The broad-based bipartisan support for these policies - in the halls of Congress and in states across the country - show that this first step will undoubtedly be followed by many more. 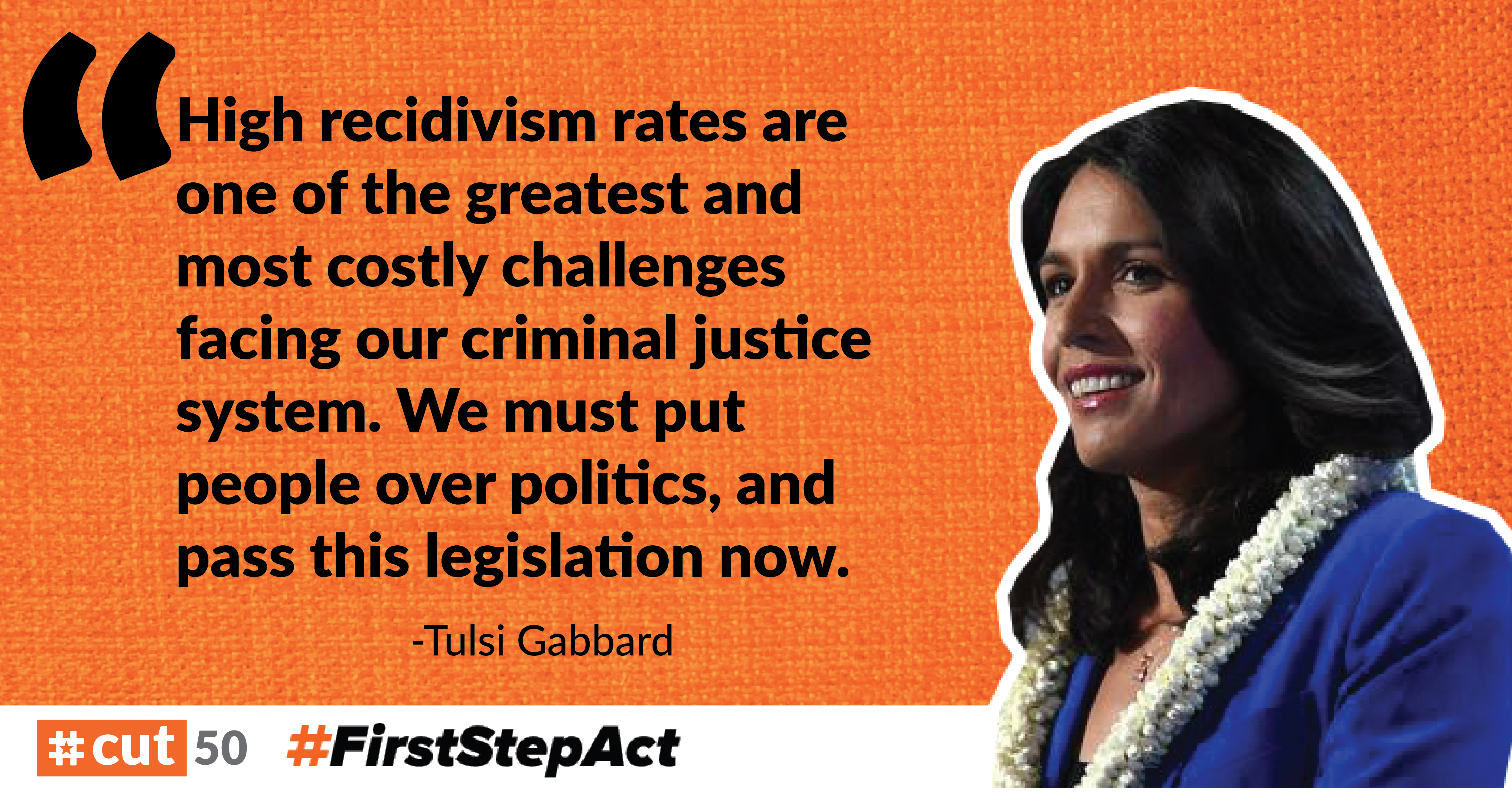 The FIRST STEP Act (S. 2795), introduced by Sen. Sheldon Whitehouse (D- RI) and Sen. John Cornyn (R - TX),will ensure people are prepared to come home from prison job-ready and have major incentives to pursue the life-changing classes that will help them succeed on the outside.

Currently, the federal prison system is failing to achieve its purpose - rehabilitation- and instead rips people away from their families, leaves them with fewer opportunities than when they entered into the system, and ultimately decreases public safety.

The FIRST STEP Act is an important piece of legislation that begins to address this. This bill will put the focus back on rehabilitation and finding ways to give people an opportunity to come home and succeed.

If passed, the FIRST STEP Act would: 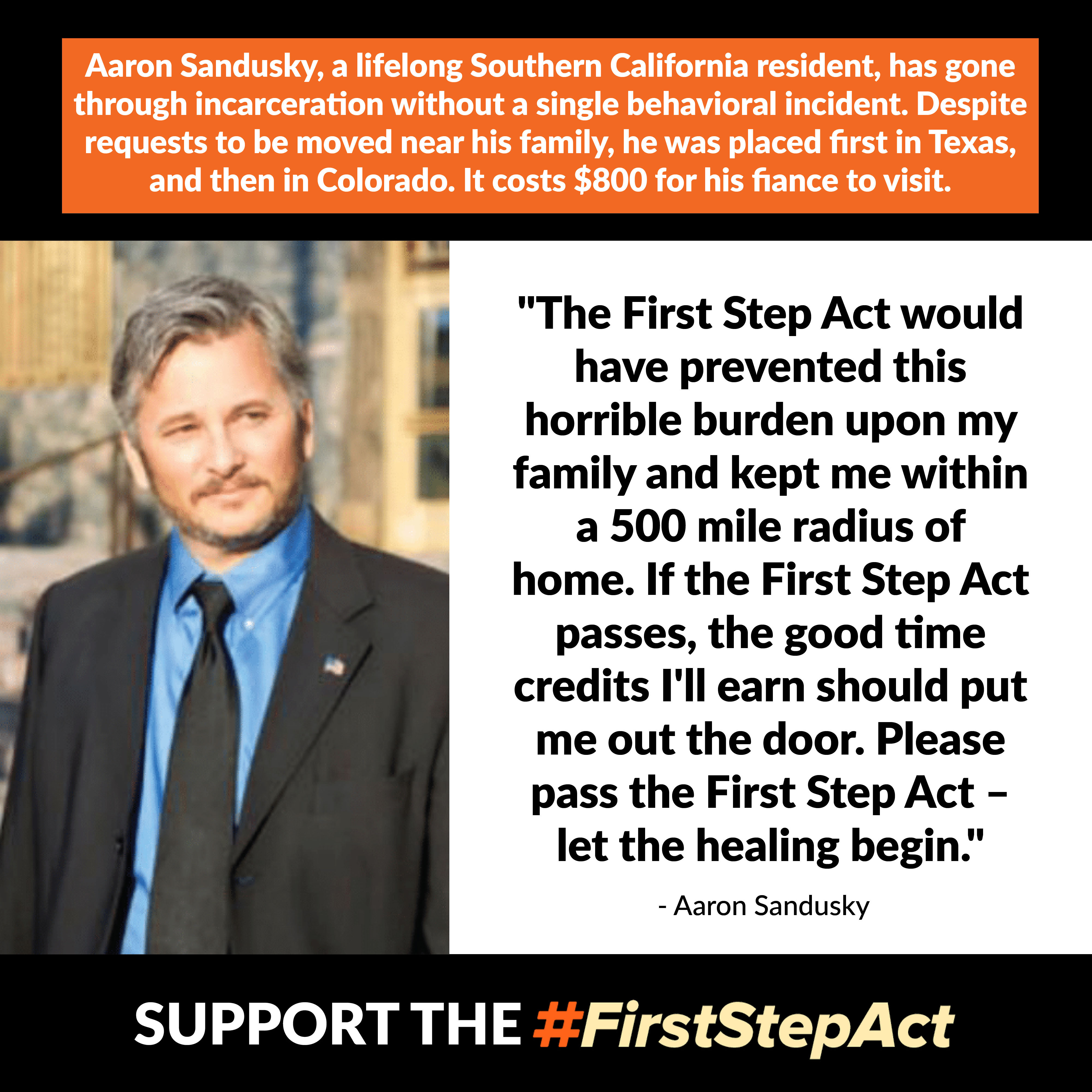 Fix Good Time Credits ensuring that incarcerated individuals can earn the 54 days of good time credit per year, and not just the 47 days that BOP currently allows. This retroactively applies to everyone in federal prison who has earned credit for good behavior. It is estimated that fixing this will allow some men and women to leave prison soon after the bill passes, yielding savings of $40 million in the first year.

Major incentives for participating in programs, allowing for 10 days in prerelease custody for every 30 days of successful participation, with no cap on the prerelease credit that can be earned. Beyond prerelease custody, other incentives include increased phone and visitation periods, transfer to institutions closer to one’s release residence and additional policies which can include increased commissary spending, access to email, consideration of transfer and other incentives solicited from prisoners themselves.

Availability of prerelease custody by requiring the BOP to transfer low and minimum risk prisoners to prerelease custody—either a half-way house or home confinement. Because the bill provides that BOP shall do this, BOP will in effect be required to improve contracting with residential re-entry centers, and improve current policies. Even for those who are not designated as low or minimum risk, the FIRST STEP Act provides a pathway to petition for prerelease custody.

Creation and expansion of life-changing classes by authorizing $250 million over five years to the BOP for the development and expansion of programming focused on skill-building, education and vocational training. These classes will help prepare individuals for a successful and lasting transition back into their communities. The bill also allows partnerships between nonprofits, volunteers, faith groups and other organizations to ensure that classes are accessible to as many people as possible.

Prioritize people inside who need it most because evidence shows that individuals who are at the greatest risk of future crime are the most in need of treatment, classes and counseling. To make legislation as effective as possible, it gives priority to incarcerated men and women who are classified as high and medium risk. 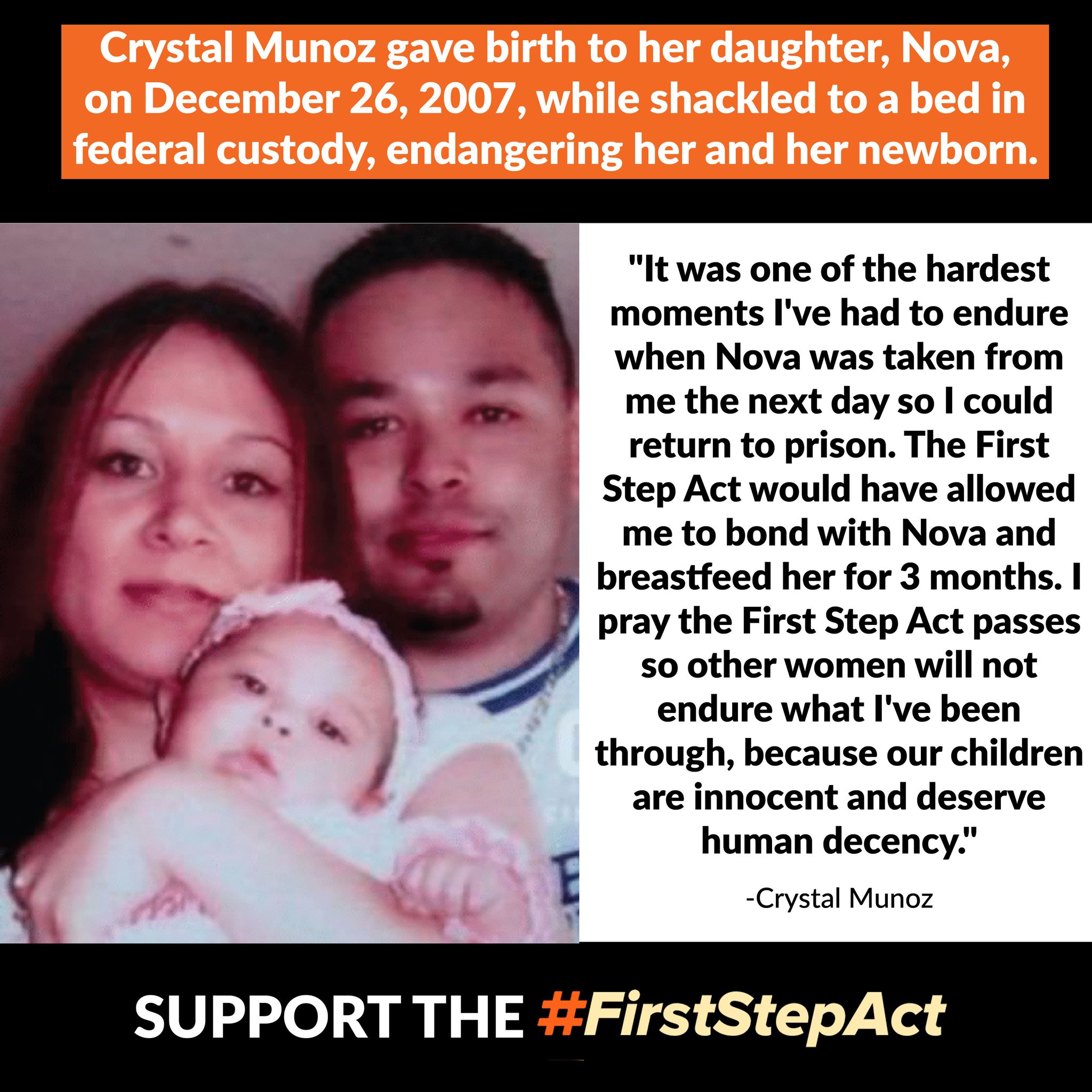 reintegrate into society successfully.  That’s why the bill mandates that prisoners shall be placed within 500 driving miles of their families, because the journey to visit loved ones in prison can be extremely burdensome and cost-prohibitive for families.

Dignity for women by banning the shackling of pregnant women and extending those protections to three months after her pregnancy. In addition, the bill requires that BOP provide sanitary napkins and tampons to incarcerated women at no cost.

Provide IDs to ensure that individuals leaving federal prison have their ID prior to their release. This will reduce the collateral consequences of incarceration by allowing a quicker integration back into society, as well as create significant cost savings of approximately $19 million.

Expand Compassionate release by reducing the minimum age of prisoner eligibility for elderly release from 65 years of age to 60 years of age, and minimum time served of prisoner eligibility for elderly release from 75% to 2/3. It also expands the program to all prisons. Finally, it allows the incarcerated individuals to seek relief under the program directly from a court so that administrative hurdles within the Bureau of Prisons do not hamper one’s ability to be released.

Hold the Bureau of Prisons accountable because we know that well-intentioned legislation can be thwarted or undermined during the implementation phase. Throughout the bill, there is language providing that BOP and the Attorney General shall do things, not just that they may do them. Specifically, that incarcerated individuals shall earn time credits for programming, that the credit shall be applied towards time in prerelease custody and that BOP shall transfer them to prerelease custody. It also states that BOP shall place lower risk individuals in home confinement. Finally, BOP shall set up a savings account for 15% of inmate compensation to be used to assist with the costs associated with release from prison. The bill also provides for a biannual GAO audit and requires the Attorney General to report annually to Congress on the activities implemented, the effectiveness of the programming, the recidivism rates and savings. 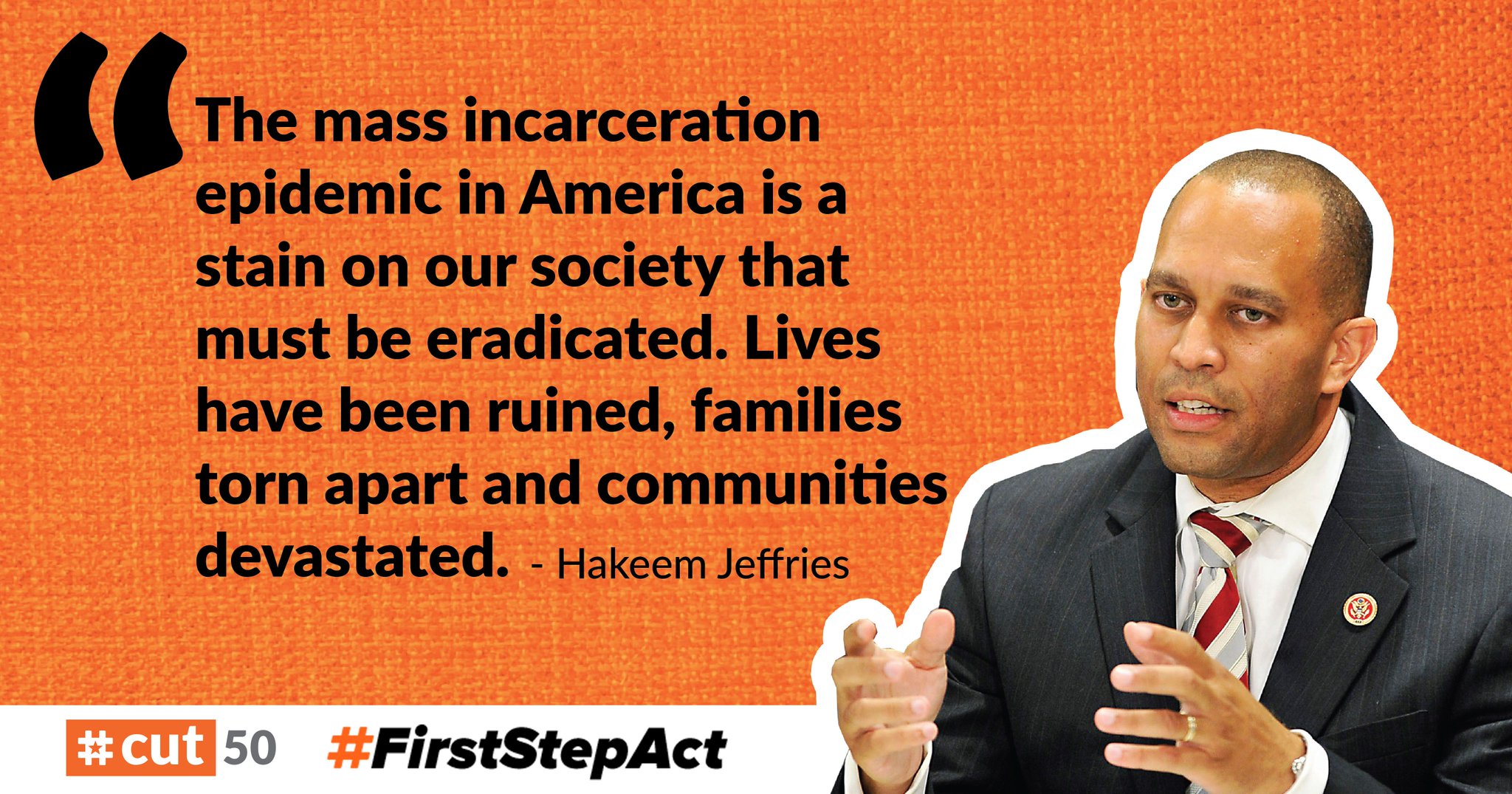